Courage in the face of adversity 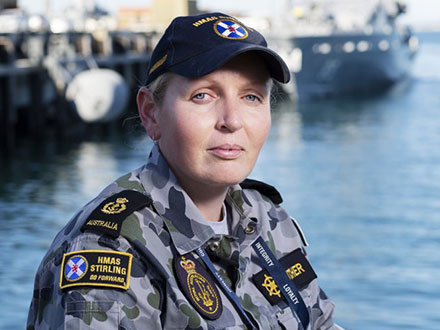 After 22 years in the Navy, Chief Petty Officer Naval Police Coxswain Jane Butcher has had her fair share of ups and downs.

A successful and rewarding career was interrupted last year when CPO Butcher received some life-changing news.

In April 2017, at the age of 39, she was preparing to leave the Navy but as she was proceeding on leave and discharge she found a lump in her breast.

“The diagnosis was that I had an aggressive cancerous tumour which was caught early due to self-examination,” she said.

This led CPO Butcher to re-evaluate her position and after seeking support and advice through her chain of command and through Navy’s various personnel welfare programs, she began treatment for her condition.

One of the initiatives at CPO Butcher’s disposal was the Keeping Watch program, which assists serving Navy members and their families who are suffering hardship, normally through non-refundable grants.

Help is available through Keeping Watch in several areas such as child care costs, essential living expenses and education/re-training for members. Thanks to the support from programs such as Keeping Watch, CPO Butcher was able to focus her attentions on getting healthy again.

“My cancer journey has so far resulted in a double mastectomy (with muscles relocated from my back to my chest), chemotherapy, two implant exchange surgeries as well as a full hysterectomy with oophorectomy,” she said.

“During this time I was also diagnosed with a stage two melanoma on my ear which required two surgeries for full removal.”

CPO Butcher, who is currently HMAS Stirling’s Command Equity and Diversity Advisor, has since withdrawn her discharge request and has committed to continuing her career with Navy.

“I feel that members need to know that the Navy cares about all of us as individuals,” she said.

“There are so many resources available to allow us to return to being contributing, sea-going members following medical issues and personal tragedies.

“Stirling Command, the Medical Centre and Navy in general, including my rehabilitation consultant, went above and beyond my expectations during my journey and continue to do so even now.”

After a long and trying road to recovery, CPO Butcher is now ready to return to sea and continue her distinguished naval career.

Asked if she had one piece of advice to offer after her own medical experience, her response was unequivocal:

“I would like to enforce the importance of both females and males conducting self-examinations to check for anything abnormal, and seeking immediate medical assistance if they find anything,” she said.

“Had I not checked myself then I may not be here to tell my story.”

CPO Butcher told her story as part of the 100 Days of Change, an initiative of Women’s Leadership Australia, which aims to prompt workplaces to make achievable and practical changes to improve gender equity at all levels.