Saying Care with a Bear 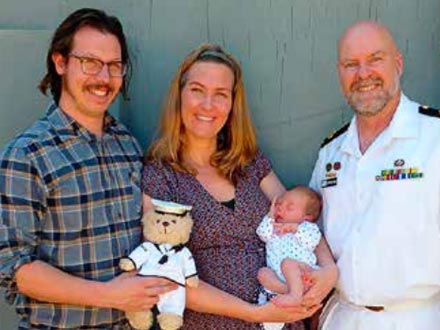 WHEN the Personnel Support Unit (PSU) Organisation was established in 2012, a limited supply of 'sailor bears' was provided to each unit to send to newborn babies of Navy women posted to the unit for maternity leave.

When the supply of bears ran out, PSU-ACT continued to source the bears from other local organisations and recently approached Keeping Watch which provided a grant to fund the continuation of the initiative.Keeping Watch was created in 2013 as an initiative of CN and the Navy Senior Leadership Group. The charity is an additional mechanism through which the RAN Relief Trust Fund provides comfort, recreation and welfare for a permanent or reserve member.

Keeping Watch's goal is to provide the financial means to support Navy personnel to assist them to continue their service. For some, this is about providing financial assistance in times of crisis, but in this case, it is an opportunity to recognise and celebrate a life milestone for serving mothers.

WOCTL Graeme Gibney, of the PSU-ACT, said the intent was to ensure members continued to feel a connection to the Navy while on leave during a period where their career wasn't their primary focus; especially in the early days after childbirth.

'The teddy bear scheme is focused on ensuring that members on maternity leave know they are not alone and that the Navy is thinking of them," WO Gibney said.

He said the initiative reinforced that Navy valued the contribution of women and supported them throughout all stages of their careers.

Many of the new mums who received a bear and the accompanying card have expressed heartfelt appreciation for the gesture.

For those wishing to make a tax deductible donationpelase visit our donations page.